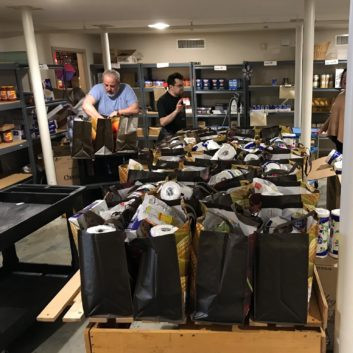 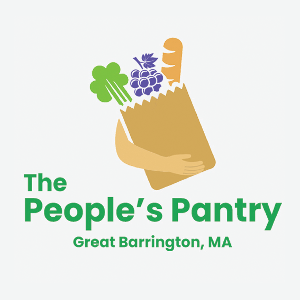 It used to be that an organization’s rapid growth was celebrated as a success story in the business pages: think Airbnb and Uber surfing the sharing economy wave, or more locally, Theory Wellness with its snaking lines of cannabis enthusiasts — all companies that hit it out of the park with an idea that struck a chord with the zeitgeist.

As we course through a second month of a freeze-framed economy and social life, that feels like a lifetime ago. Today’s champions of managing rapid growth are a more modest mission-driven bunch. Like the People’s Pantry.

For the past two decades, the People’s Pantry has reliably fed about 175 local residents a week, mainly older residents on fixed incomes or disability. And the volunteers, many from area churches and synagogues, were an older bunch, too, retired or working part-time with time and goodwill to spare. Customers arrived once a week, on Monday evenings, to St. James Church in Great Barrington. Volunteers helped them navigate the shelves of food, roughly 100 shoppers feeding themselves and sometimes a spouse back home. A half-dozen volunteers rotated through every seven weeks in teams like clockwork.

Then came the deluge, a financial one of biblical portions, practically overnight. And it continues to rain.

The food pantry is now open twice a week (and for increased hours), and feeds about 500 residents a week. And the line continues to grow: 200 shoppers, now feeding households averaging three to four persons, many of whom are children, in addition to those who have counted on the pantry for years now.

“We used to supplement people on tight food budgets,” said Anne Hutchinson, director of operations for the food bank, a title she’s only partly sure of because how much does that matter right now anyway? “They were older or disabled. We supplied them with additional food that concentrated on good nutrition. Now, we’re also feeding young families with no safety net, no income. We’re keeping kids from going hungry. That’s what we’re doing now.”

“And it was overnight,” Hutchinson added. “The number of people doubled overnight. And we had to figure out how to feed them, and efficiently.”

Stunning customer growth by any measure when it comes to managing it — tough in normal times, dizzying in these times. Previously reliant on ripe produce gleaned from Guido’s and Big Y, day-old bakery bread and treats, and bulk-buying of sales items, the People’s Pantry has had to innovate. Those luxuries are no longer reliable and for all practical purposes, no longer exist for the foreseeable future.

Produce is in shorter supply. Something as basic as bananas can no longer be taken for granted. Day-olds? There are no day-olds. And if there were, they’d be gone in a jiffy. Got a hankering during the Hunkering for sticky buns? Fuggedaboutit. And how much luck do you think the pantry has trying to order pallets of sale items like cereal, tomato sauce, tuna, and mac and cheese? That’s right: none. Ask a manager at Big Y if they can spare a pallet or when the next shipment is coming in and they’ll likely shrug. They don’t know because nobody knows. It’s like asking your neighbor what day it is.

“You can’t go and buy 40 pounds of bananas anymore,” Hutchinson said. “You can’t go in and buy 100 boxes of cereal anymore.” And now the People’s Pantry needs that and more like never before — a charitable organization thrust into the unknown, a hopeful finger in the dike whispering a prayer.

“We need tomato sauce,” she continued. “Thankfully we put out the word and got 200 jars. But those will be gone by the end of this week. And cereal — we really need cereal. Cereal. Cereal. Cereal. We need cereal. The families need cereal. How long do you think a box lasts in a family with two kids? I’d say about two days. We can’t buy bulk, but if people want to help, they can buy an extra box or two of cereal and help us help others.”

As supply chains creak, groan and begin to shiver and sputter, the People’s Pantry does what it can. Monthly orders from the Food Bank of Western Massachusetts repository in Hatfield for 1,400 pounds of dry goods and frozen meat are now weekly orders for 2,000 pounds. How do they pick it up? The Berkshire Botanical Garden kindly donates a minibus and driver to transport the now-massive orders. Produce? Guido’s kindly picks up produce in Boston on its own weekly trips. That’s right. A food bank that cares about nutrition now provides the needy with Guido’s-level produce (minus the organic). Take a peek: The heads of broccoli are stunning. The folks at Berkshire Bounty transport it the last mile, as well any other produce wherever they can find it. Like the Berkshire County House of Correction: The hydroponic lettuce is to die for — not literally, but it’s gorgeous.